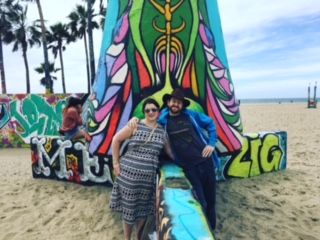 The first official day of the Dirty 30 Tour began in the West Hills at casa de Ricky and Vivi. Ricky made eggs and turkey sausage with coffee and we listen to “Work from Home” by Fifth Harmony – my way to start the day. Ricky showed me the beautiful rose bushes in his

yard – the pink blossoms were in all stages, and the recent rains really made them bloom. We geared up and took off for Venice Beach not long after.

On the way to Venice, Ricky stopped to get supplies – an eighth of Sunset Sherbet (sativa dominant flower), an infused chocolate cookie (saving for tomorrow), and a pre-roll for Venice. The guy in the car next to me was 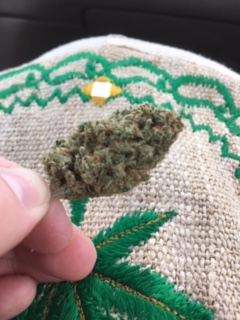 listening to System of a Down – as we waited for our counterparts, we sang along and agreed that Serj Tankian was an amazing singer and soul.

Ricky drove us through lush hills that blew my mind. The recent rains had brought out a million shades of green that I could have never dreamed of. The natural beauty literally took my breath away. The Sunset Sherbet was the icing on the cake.

In Venice, we saw body-builders, skateboard kids, and fancy ladies in hats. Typically not one to purchase weird souvenirs, there was one item that caught my eye…stay tuned for a future post featuring this super special item.

The fellas from the shop and I stepped out to smoke a joint – very nice boys. We agreed to be best friends forever and Ricky and I continued to view the Pacific Ocean.

I noticed a weird statue and simply had to get closer. A German fellow by the name of Sebastian was hiding, taking photos – I asked him to make a picture of us and he gladly agreed. We talked about the Netherlands and I mentioned I may be in Berlin (Sebastian’s hometown) – hopefully he and I can grab a beer and a dab before I leave.

On the way back to West Hills, Ricky brought me to an amazing delicatessen that could 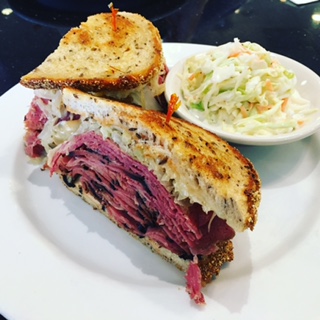 give Cecil’s in Saint Paul a run for their money. The pastrami and corned beef Reuben was fire. Ricky and I used to go Cecil’s every day for probably two years and it remains one of my favorite places in the world. It’s lovely to find familiar flavors out and about.

After lunch, Ricky took me to an AirBNB where I will stay for the next couple nights. The space is a room with private bathroom – perfect for my needs. The room has several Buddha statues and I naturally felt at home – and peace.

Later, I met with my friend Tony Camin and his wonderful wife Carol Kolb. She is also from bumfuck Wisconsin so we bonded immediately. I met Tony at Acme in Minneapolis several years ago – he is a comedian and a beautiful soul. After an incredible meal of stuffed

mushrooms and salmon oscar (plus three glasses of Pinot Noir), we said our goodbyes knowing we will see each other soon.

I set off in search of a karaoke bar and was first taken to a Korean spot with rooms for rent. Not my scene. But the Lyft driver, Diana, was incredible. She told me about how she worked at a group home and of course, I couldn’t have been more humbled to be in her presence. The woman running the spot let me use the powder room and I happened upon a nice lady who bummed me a P-Funk. The universe provides again.

und another karaoke spot in Sherman Oaks called Oak Tavern. This is the place. So familiar – awesome friends, awesome beer, awesome vibes. I met some nice folks – Wesley, Brent, Jeffrey, and Sydney. We drank, smoked, sang and had an all around fun time. I represented hard – Dirt Off Your Shoulder by Jay-Z naturally. The place was lit and an awesome dog named Tony appeared outside.
Perfect!

I am so excited to begin my journey – it has been full of love and blessings so far and it’s only day 1. So much love around me 🙂